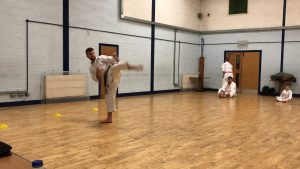 Our grading began with the white belts, and gradually went up though all the colours to brown. The grading consisted of Basics, Kata and Kumite, each varied from beginner to advanced grades. The examiners on the day were Sensei Don Morrison, Sensei Sarah jane Stoddart and Our Federation champion Sensei Mohammad.
All students performed up to their best ability ,showed great spirit and energy. Proud students of Alfa Shotokan Karate Club have been awarded new belts after a successful grading, Two of our students got temporary pass & will be reassessed in next grading which we take very positively and are committed to improve with the best of our ability. Well done to all and big thanks to parents, guardians and our club fans!!! Alfa Shotokan Karate Club is looking forward to a very exciting year !

Special thanks to my Sensei Albert Gustis for his unconditional support .