Spoken with pride
A Dojo Kun is a verbal affirmation that is recited by all of the students, usually at the end of each training session.

The purpose of the Dojo Kun is to remind all of the students in the dojo, regardless of their rank, that the physical, mental, and spiritual growth that they enjoy as a by product of their karate training, must also extend beyond the dojo’s walls.

By that I mean, in order to derive the true benefits of Shotokan karate-do, each student must take the underlying principals of this art form and make them a regular part of their daily life.

The following Dojo Kun is taken from the 20 Precepts of Master Gichin Funakoshi, it should be recited out loud one line at a time, first by the dojo’s sensei or senior sempai, and then repeated immediately afterwards, in unison, by all of the students in attendance prior to the final bows at the end of each class. 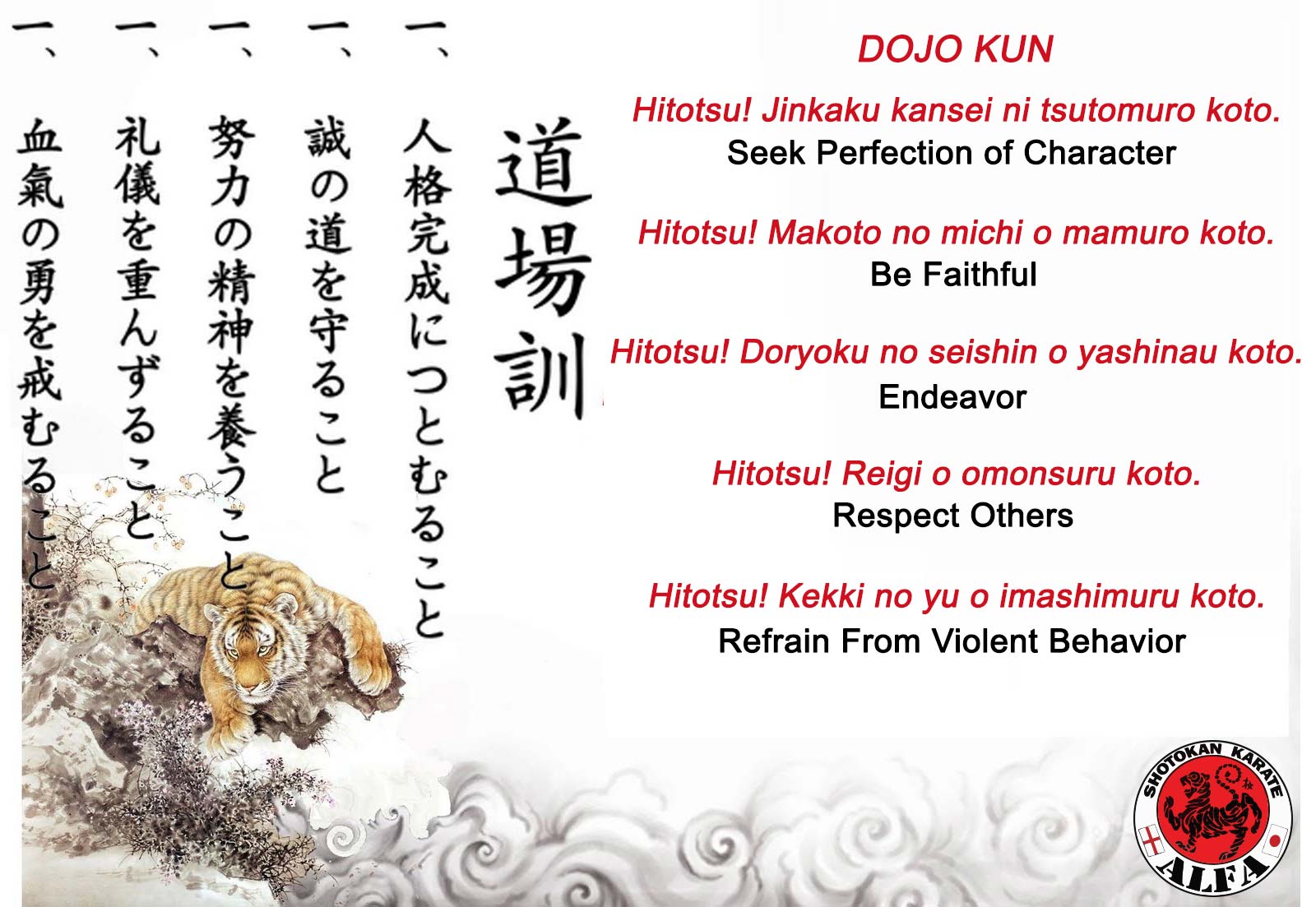 And when you leave your dojo, always be sure and take the meaning of those words out into the world with you. Because it is in the every day world that is outside of those four walls that you train behind each day, that the true meaning of the dojo kun is truly meant to be practiced.

The following explanations set forth the meaning of the Dojo Kun.

Character
This means that the art of karate is more than just physical. All beginners, especially the young, should be taught the importance of character building through discipline and rigorous training. For the beginner, the character building process begins with perfecting techniques through repetition. The spirit to fight will be achieved as one gains more confidence through development of stronger techniques. Train to bring out the spirit, not only to fight but to overcome personal problems especially in times of sickness, domestic crisis or business problems. It is a long path to develop these spiritual values but once the concept is understood and experienced it will provide a lifetime benefit of inner strength and peace.

Loyalty
To be faithful is a strong samurai tradition and an extension of the Confucius influence on the family and martial arts. The faith to be shown is in your sensei and dojo. The student must always be faithful to his sensei and follow in much the same way as a medieval samurai was bound to follow his feudal lord to the death without hesitation. While this may seem unusual in the present day, it is unreasonable to expect a sensei to teach all he knows to a student who is likely to leave for the slightest reason. The student must prove his loyalty over the years. The faith and loyalty extended to the sensei will be rewarded, in that a greater amount of knowledge and wisdom will be passed on to the student and this bond between sensei and student is extremely valuable and is the basis of the learning relationship.

Effort
To endeavor means complete dedication and commitment necessary to achieve mastery of the art. In no case is mastery possible without strenuous effort and sacrifice on the part of the practitioner. The endeavor must be of a sincere nature and not just superficial. Serious effort on the part of the student will be recognized by the sensei who will in turn spend more time with him or her.

Etiquette
Respect for others is an important part of the Japanese and Okinawan culture therefore common to the martial arts. Gichin Funakoshi stressed that karate begins and ends with etiquette. He also stated that without courtesy there is no dojo. This is a reflection of the formal nature of the Japanese people and may be observed bowing during training as well as at home or office. Dojo etiquette is well defined. You bow correctly and show respect in everything you do and everywhere you go. Respect is extended to all…senseis, parents, educators, law, deceased, nature, etc.

Control
A trained fighter is a person with a fierce competitive spirit and great strength so it is unfair to use it against an untrained person. The karate-ka’s spirit is unbeatable and must use his knowledge only for the sake of justice. A person of character can walk away from a fight because he is in control of his emotions and is at peace with himself. He does not have to test his abilities on the street. He wins without fighting and he will have no regrets because no one will be injured. Refraining from violent behavior is hard to explain to many Westerners because of their environment, or the attitude of winning tournaments, and they want to do it as quickly as possible which is against the principles of karate-do and dojo kun. It is therefore necessary for instructors to constantly remind the students of the importance of the dojo kun.

Remember
Regardless of when you say the dojo kun,
or in what language you speak it,
say it with pride and say it like you mean it.